Brazil’s rapid agricultural expansion and population rise make its carbon dioxide emissions from land use and land cover change the largest in the world, contributing somewhere between 17 and 29% of the global total.

The range represents the considerable uncertainty in these emissions, due to different ways to calculate them. It’s important to improve these estimates to reduce the uncertainty in the global carbon budget assessments, which chart our collective progress towards the Paris Agreement target of keeping global warming below 1.5°C.

Researchers from the ESA Climate Change Initiative RECCAP-2 project recently published an assessment of the multiple ways to calculate the Brazil emissions for the period 2000-2019 using models and satellite Earth Observations.

To improve the estimates, they found that updating a model of vegetation change using the multi-annual maps of land cover (via ESA CCI Land Cover) produced better agreement with in-country and other global estimates. Their method produced the declining trend in emissions observed over the period and improved the simulation of the arc of deforestation in Amazonia, southeast of Brazil.

The team used HYDE3.3, a land use dataset based on new FAO inventory estimates and multi-annual ESA CCI land cover maps. With HYDE3.3 the team simulated a declining trend of emissions from land use and land cover change over Brazil, when applied as an input to a global bookkeeping model (BLUE) and a process-based Dynamic Global Vegetation Model (JULES).

ESA Technical Officer for the RECCAP-2 project, Clement Albergel, says: “The situation is vastly improved and approaches now agree with in-country estimates on the trend and spatial pattern, although magnitude can still be improved – this could be achieved by including new processes and additional Earth Observation data, for example linked to fire (via ESA CCI Fire), and using finer resolution data for deforestation.” 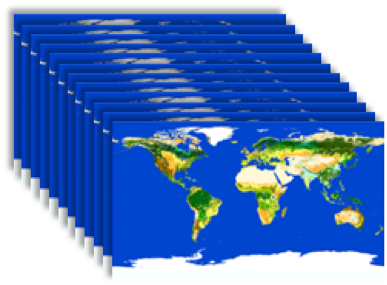