As global temperatures continue to rise, coastal areas will increasingly bear the brunt of storm surges and more frequent, intense weather events. Sea level is rising at 3.6 centimetres per decade and this trend is accelerating, compounding the threats faced by coastal communities: with every centimetre another three million people are put at risk of annual coastal flooding. Scheduled to be launched on 21 November, the Copernicus Sentinel-6 Michael Freilich satellite is set to continue the long-term record of sea-level measurements that are needed for protect our coasts.

Reliable, accurate and long-term observations of sea-level rise and its impact in the coastal zone are vital to be able to plan and better protect the 10% of the world’s population living less than 10 metres above sea level.

The Copernicus Sentinel-6 Michael Freilich satellite will take over the responsibility as the reference mission for sea-surface height measurements, a role initiated by the French-US TOPEX Poseidon satellite in 1992.

The reference mission plays an important role as it ensures continuity of altimetry observations in the same orbit, against which satellite observations from different orbits, with different instruments, are compared. This enables scientists to generate a stable time series of global sea-level measurements from multiple satellite missions. The Jason series of satellites continued the legacy, and now Sentinel-6 will provide a new class of measurement capability until at least 2030.

“It’s a great success for Copernicus to take the lead as the reference altimetry mission. It will really be the workhorse for providing evidence of sea-level rise and acceleration, serving a huge variety of coastal applications for the next decade,” says Craig Donlon, ESA’s mission scientist for Sentinel-6.

A new class for ocean measurements

Copernicus Sentinel-6 is a two-satellite mission, with the second satellite scheduled for launch in five years. The mission has been developed by ESA in a unique partnership with the EC, EUMETSAT, NASA and NOAA. It carries the European Poseidon-4 altimeter that, for the first time, introduces a synthetic aperture radar capability to the altimeter reference mission time series.

Synthetic aperture radar techniques are capable of measuring the sea-surface height with greater precision and better along-track sampling: achieving a spatial resolution of 300 m compared to previous missions that covered several kilometres of the ocean surface.

Importantly, Sentinel-6 ensures compatibility with previous missions because it uniquely and simultaneously provides both a low-resolution and a high-resolution observing mode.  In addition, it will adopt a dedicated tandem flight for 12 months, orbiting just thirty seconds behind Jason-3 to check for and eliminate any artefacts in the data that might arise owing to the new satellite’s instruments and design.

“Sentinel-6 includes several elements that set it apart as a climate mission including the dedicated tandem flight and mission requirements that constrain the drift of both the radar altimeter and microwave radiometer measurements over the mission lifetime,” says Dr Donlon.

As well as mapping the height of the sea surface, data from the altimeter will be useful for measuring waves.  Significant wave height – trough to crest of the tallest third of waves – together with wind speed over the ocean are known collectively as ‘sea state’. These measures are intimately linked to how the radar altimeter measures sea-surface height and determines sea level.

Since data from moored buoys are largely limited to coastal zones, radar altimetry provides the longest and most complete time series of sea state.

In the coastal zone, radar altimetry data is particularly useful for understanding storm surges, as it can be used to determine the ‘total water level envelope’, which includes the mean rise in water levels as well as the waves riding on top. Waves can ‘over-top’ coastal defences and cause catastrophic flooding, sediment transport, damage to infrastructure and loss of life.

Long-term data records of sea state are needed to assess changes over decades, for projecting future climate change with models, and to inform decision-making. They are also used for ship routing, ship and marine infrastructure design, marine insurance, ocean wind farm development and coastal defence planning among many other applications. 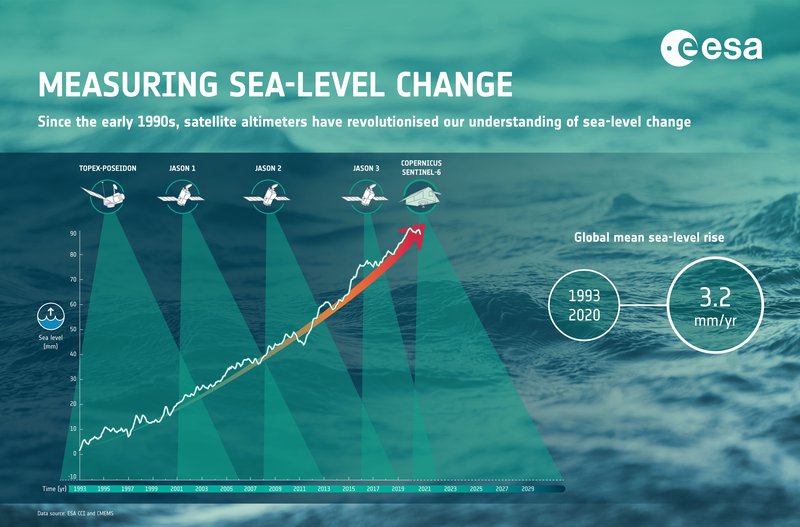 Earlier this year, the CCI Sea State research project released a new global dataset of significant wave height spanning 1991–2018, as one of the 23 essential climate variables required by the UNFCCC to support understanding of the climate system. Sentinel-6 will extend this record.

Bringing global data to the coast

Despite the threat that sea-level rise poses to coastal communities, observations close to the coast have been poorly characterised.

To address this, the ESA CCI sea-level team has developed a novel altimetry-based coastal sea-level dataset consisting of high-resolution (~300 m) monthly sea level at distances of less than 3–4 km from the coastline, and up to 1–2 km from the coast, spanning 2002–18. Whilst the coastal trends show no significant difference (within +/-1 mm/yr) to the open ocean trends in 80% of sites studied, this is not true everywhere, for reasons that remain to be studied.

To address the need for better coastal information, ESA continues to support the science community in improving the coastal altimetry datasets and applying them, through a series of Coastal Altimetry Workshops. The 12th workshop was held in February 2020.

From coastal to global improvements

Recent improvements to the algorithms used for radar altimetry at the coast have fed back to altimetry for the open ocean too. A combination of new tropospheric corrections and innovations near the coast, plus new Ka-band radar instruments with smaller footprints have helped improve the accuracy of measurements near the coast.

The delay-Doppler synthetic aperture radar altimeters – such as those on Copernicus Sentinel-3 and Sentinel-6 – also achieve finer spatial resolution and better precision for significant wave height and sea level. The long-term data records produced under CCI also make use of the point measurements from tide gauges and buoys for calibration and validation of a dataset’s accuracy.

CCI’s Sea Level project works to integrate new missions to update and improve on its global data record, which currently merges data from 13 satellite altimeter missions. The data is produced operationally through the Copernicus Marine Service, serving the information needs of a huge variety of users.

Like the ocean tides that are continually moving, the European Commission together with ESA and EUMETSAT are moving Copernicus forwards with six new high-priority Copernicus missions and the next generation of Copernicus altimeters.

Six new missions are being prepared to address critical user needs within Copernicus. Over the ocean, these include the CRISTAL mission that will fly a dual-frequency altimeter with a focus on the cryosphere, the CIMR mission that carries a multi-frequency microwave radiometer to study the Arctic Ocean in a global context, and ROSE-L which is an L-band synthetic aperture imaging mission called for enhanced measurements over sea ice.

Dr Donlon noted, “In addition, we are now preparing the next generation Copernicus Sentinel-1, Sentinel-2 and Sentinel-3 missions to ensure we have long-term continuity of enhanced measurements from space, maintaining Copernicus as the world’s most comprehensive Earth observation system.”