Amazon biomass in decline due to deforestation and degradation

Hot on the heels of COP27, the journal Global Change Biology has published a pessimistic satellite-based assessment of the Amazon that both provides a timely assessment its carbon dynamics and new data to assess national carbon budgets.

The study tracked inter-annual changes in carbon-rich above-ground forest biomass across the entire Amazon region and incorporated nine countries. Overall the researchers estimate a net loss of 1,300,000,000 tonnes in stored carbon between 2012 and 2019 (Figure 1). The research however sheds important light on the cascading effects of degradation and secondary regrowth on the forest’s overall carbon dynamics. 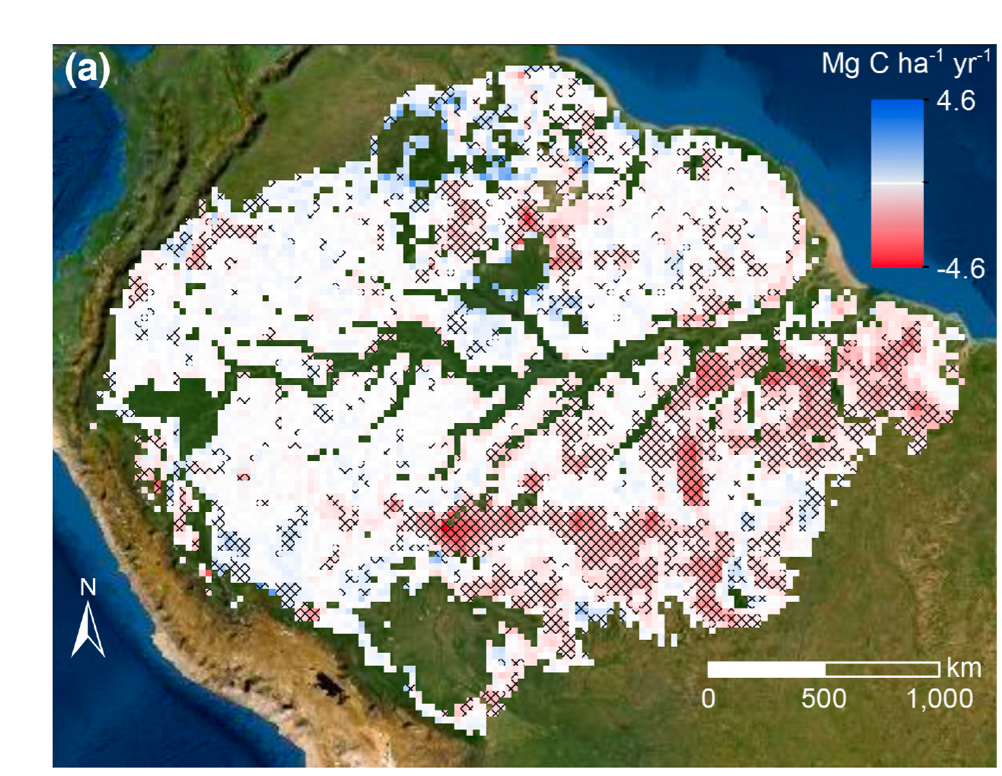 Older, established forest was found to exhibit average net losses between 2012 to 2019, following an increase during the first year of the study period and adds evidence to suggest the Amazon’s ability to act as a carbon sink may be weakening. Forest degradation – a result of processes such as fire, logging and fragmentation and edge effects, which expose to climatic pressures - accounted for a significant 40% of the gross losses during the study period. Combined, these losses greatly outweighed gains associated with regrowth of secondary forest by a factor of five, according to the research team (figure 2).

“The study illustrates that processes associated with, and not just, deforestation have a significant negative impact on forests’ ability to store carbon,” explains, lead author Dominic Fawcett of the University of Exeter.

“We observed forest biomass losses followed an arc of deforestation in the region. Besides the initial removal of biomass, fragmentation resulting from deforestation creates conditions that lead to higher fire probability ,while also exposing forests edge to negative climatic pressures. Both of these knock-on consequences can exacerbate further biomass reduction.

“Sadly, secondary regrowth appears to have been insufficient to compensate for biomass losses from deforestation and cascading effects during the study period.” 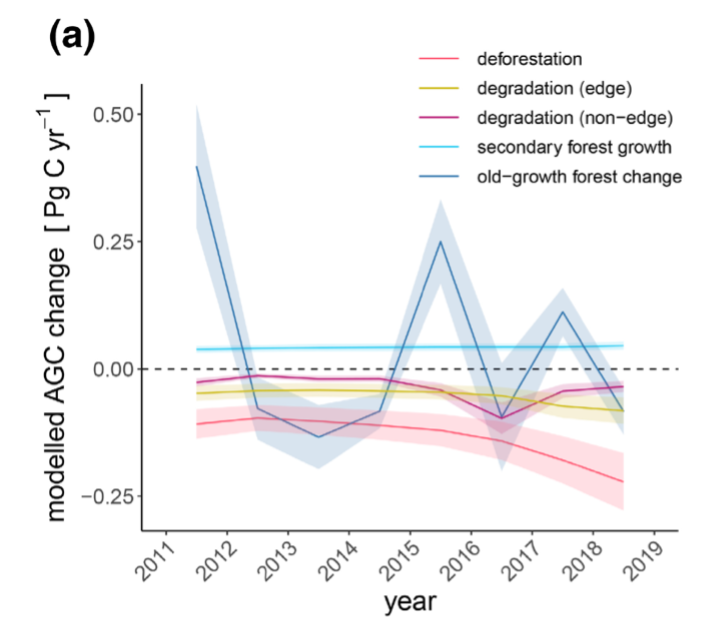 Understanding the drivers of losses and gains is essential to forecast the future trajectory of the amazon as a forest carbon sink and a long-term reservoir that can mitigate climate change. Dr Fawcett points out that although land use changes, including deforestation, are reported in bottom-up national greenhouse gas and land use change inventories to the UNFCCC, forest degradation extent nor the resulting carbon released are currently not captured.

He adds that, “if national inventories did account for degradation, they could more accurately reflect global emissions and improve the effectiveness of mitigation policy and progress by individual countries to deliver on their pledges as part of the Paris Climate Agreement.”

This work highlights the urgent need to stop the recent rise of deforestation and degradation, particularly in the Brazilian Amazon, according to the authors. Of the nine Amazon countries studied, Brazil on account of its area, was found to contain the majority of biomass stocks (64%). Gross losses from the country however ere disproportionately high at 79%.

“Despite the identified need for Brazil to curb deforestation, the country's recent government instead created stimulus for illegal activities such as land-grabbing, mining and agricultural expansion in indigenous territories. This set the country on a course of forest fragmentation and degradation projected to cause emission 20-fold higher by 20250 than sustainable scenarios,” adds Dr Fawcett, who welcomes recent announcements by Brazil's new President-elect, Luiz Inácio Lula da Silva who stated during COP27 to reverse the situation and work towards zero deforestation of the Amazon rainforest.

ESA’s Climate Change Initiative biomass map, with a resolution of just 100m, was used as a reference data from which to calibrate the annual L-VOD index values to above-ground biomass carbon

Visit the RECCAP-2 project pages to find out more about the project.

Learn More
How satisfied are you with the Climate Office website?
How could the site be improved?