Glaciers across the planet are known to be shrinking, as recent satellites surveys have indicated, but a new satellite study confirms this with greater certainty and unprecedented spatial coverage than before. The authors also warn that the rate of melting is accelerating.

By monitoring the change in glacier volume around the world from space, scientists can learn about the regionally variable impacts of global climate change and provide early warning of future negative consequences to policy makers and communities.

The study, published in the journal Nature, reveals that ice mass losses from glaciers worldwide were on average 267 ± 16 gigatonnes (Gt) each year between 2009-2019.

Over the past 20 years, the world's glaciers have lost almost as much volume as the two ice sheets Greenland and Antarctica combined, according to Andreas Kääb of the University of Oslo, a co-author of the paper and member of the Glaciers_cci team.

The rate of ice loss from glaciers worldwide also appears to have accelerated in recent years according to the study, and reflects findings from satellite-based surveys of the wider cryosphere.

Between 2000 and 2004 the research team estimate glaciers lost 227 Gt of ice per year, rising to 298 Gt from 2015. Alaska, Iceland and the Alps were cited as regions where melting occurred fastest.

Over the study period ice loss from glaciers contributed 21 percent to observed sea level rise - some 0.74 millimetres a year. This places glaciers as the third, behind thermal expansion of ocean water and losses from the Greenland and Antarctic ice sheets as a contributor to sea level rise. 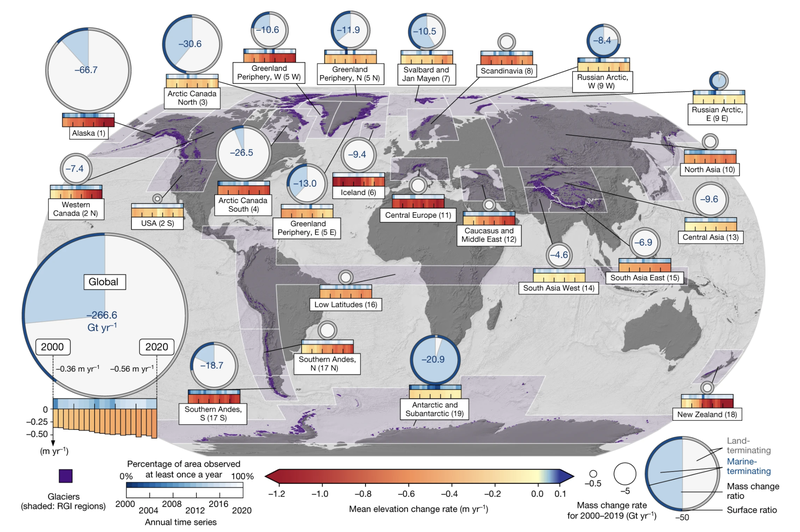 The shrinking cryosphere was the subject of a recent IPCC Special Report with declining glacier ice mass previously reported in studies that used only observations from a subset of the worlds 220,000 glaciers. This new study, however, includes all of the world’s glaciers – outside of the Greenland and Antarctic ice sheets.

The main data source for the study came from the ASTER sensor on board NASA’s Terra satellite. Key methodologies used to calculate changes in the thickness and mass of the ice over time, however, were also developed by members of ESA’s Climate Change Initiative Glaciers team, including work on digital elevation models and data processing tools. The Glaciers_cci team and its predecessor project GlobGlacier also contributed much to the global inventory of glacier outlines – the Randolph Glacier Inventory – that has been used as a base to spatially constrain the calculation of elevation changes over glaciers.

In contrast to the global decline, there were a few regions where glaciers were shown to have grown such as the Karakoram mountain range in the border area between Pakistan, China and India being the main example.

“In these areas, precipitation, which was found to increase there, comes as snow and has added to glacier mass in the past which is also known as one element of the so-called Karakoram Anomaly”, explains Andreas Kääb.

He points out that the period of growing glaciers is drawing to a close. “As average global temperatures further increase, addition to glacier mass through precipitation of snow is expected to continue compensating for increasing rates of ice melt only for some time into the future.”

Glacier meltwater contributes to sea level rise, impacting coastal communities often far away from the glaciers itself. In regions such as the Himalayas or the mountains of South America, glaciers are also important sources of water, feeding major rivers, supporting agriculture, particularly during dry periods and providing freshwater to millions of people.

Strengthening our understanding of glaciers and their response to climate change, is a further important outcome of this study. Due to the high spatial variability of glacier changes, measurements on selected glaciers might be biased and leading to wrong conclusions. Now the scientists have for the first time the complete picture.

Frank Paul, the scientific lead of the Glaciers_cci project, explains “Studies such as this one also help to calibrate glacier evolution models that are used to inform communities and decision-makers about future changes in glacier volume, extent and run-off and ultimately water availability in all regions where glacier meltwater is important for human livelihood.”

Andreas Kääb adds that, “changes to glaciers have important implications for communities near, or ‘downstream’ from glaciers, “As it gets warmer and the glaciers melt, there will first be a lot more melt water with increasing flooding risk. If, as expected, glaciers continue to shrink, the trend reverses and populous countries like Pakistan or the population in the dryer parts of the Andes potentially facing water and food shortages in a few decades.”