Seasonal snow cover is a crucial and challenging research issue in climate analysis and modelling. It influences energy, moisture and gas fluxes between the land surface and atmosphere; its high reflectivity, or albedo, provides a significant feedback effect in a warming climate; and its sensitivity to precipitation and temperature regimes makes it widely recognised as a fundamental indicator of climate variability and change. Snow is also a major, if not dominant, freshwater source in many alpine, high- and mid-latitude regions an important contribution to the global water cycle.

The Snow_cci project aims to contribute to the understanding of Snow in the climate system by generating consistent, high quality long-term data sets that meet the requirements of the Global Climate Observing System (GCOS). 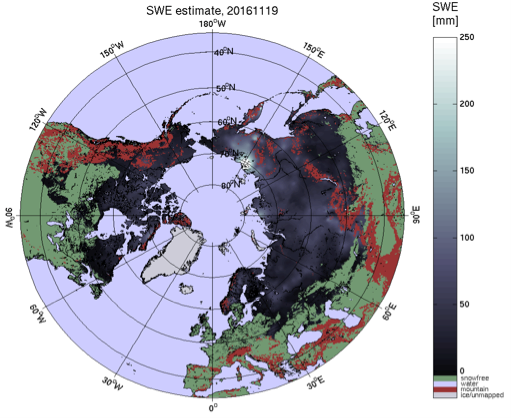 The goal of the Snow_cci project is to set up reliable, fully validated processing lines for key parameters of the global seasonal snow pack, to be used for re-processing time series of archived satellite data, for processing current satellite observations, and to prepare for exploitation of future satellite data acquisitions.

The Snow_cci will address the primary snow parameters defined by Global Climate Observing System (GCOS), which can be derived from archived and current EO data, namely:

The third parameter identified by GCOS, snow depth, cannot be observed directly by archived or current EO data and is not taken into account in this project. However, it can be derived directly from SWE if snow density is known or estimated.

The technical component in the first phase of the Snow_cci project will focus on development and implementation of methods and processing systems to generate consistent multi-sensor time series of global snow parameters, namely daily fractional snow cover and snow water equivalent, from data of ESA and third-party satellites. These products will contribute to the determination of the long-term trends in seasonal snow since beginning of the early 1980s, currently still a matter of debate due to various inconsistencies between different snow cover data sets, as shown in the ESA QA4EO project Snowpex.

The snow extent product will have a spatial resolution of 1 km and daily global coverage (excluding ice sheets), as illustrated in Figure 1. We will develop and implement a consistent system to generate products of snow on the surface (viewable snow) and snow on the surface corrected for any forest masking (snow on ground). Both products will be expressed as fractional snow per pixel and will be derived from medium resolution optical satellite data. The multisensory time series, starting from the beginning of the 1980s to present day, will include data from AVHRR-2/3, ATSR-2, AATSR, MODIS, Sentinel-3A/B SLSTR and Spot/Proba-V Vegetation. For each product the uncertainty will be estimated for each pixel taking spectral capabilities, calibration and geolocation accuracy into account. A key aspect of the long time series of daily products will be cross-sensor consistency of the products. Aggregation methods will be implemented to generate weekly, bi-weekly, monthly and seasonal snow extent products, following the requests of the science community.

The snow water equivalent production system will be built on the GlobSnow SWE production system (Figure 2) and will be further developed by improving various aspects of the processing chain, including time variable snow density, influence of land cover and implementation of techniques for enhancement of brightness temperature resolution. The daily global time series will be based on SMMR and SSM/I data (from a number of DMSP F-series satellites) starting in 1978 to present day. A key aspect will also be the synergy between the daily time series of snow extent and SWE products, with the aim to get a consistent cross parameter data set.

The snow extent and snow water equivalent products will be made available to the Climate Research Group (CRG) and the wider scientific community, requesting feedback on the quality of the products to further improve the ECV snow products.

Involvement and communication with the international climate research community will be coordinated in two ways, through the User Workshops on user requirements and product specifications and through the following case study projects led by members of the CRG:

Assessment of output from coordinated model experiments from the ongoing ESM-SnowMIP, LS3MIP and CMIP6 model intercomparison against the Snow_cci products, carried out by CNRS

Extension of the point scale evaluation of historical ESM-SnowMIP simulations with Snow_cci data, carried out by University of Edinburgh

Utilization of Snow_cci products to investigate the role of snow cover changes for the observed changes in the hydrological regime over the large pan-arctic drainage basin of the Arctic Ocean, carried out by SMHI.